Free Verse offers varied options to structure our poems. While free of rhyme and rhythm, free verse by master poets gives us our own MMO.

Once we see the MMO in action, we discover free verse is as highly structured as the pure and blank verse forms.

Let’s look at three different version of Free Verse :: Shaped, Catalog, and Classic. When we want our poetry memorable, we learn from the masters.

For each, we will have an example of an Old Master, On the 25th, we’ll look at New Masters.

A first practitioner of shaped verse, Herbert did follow a rhyming pattern. He worked in the early 1600s. How’s that for age? 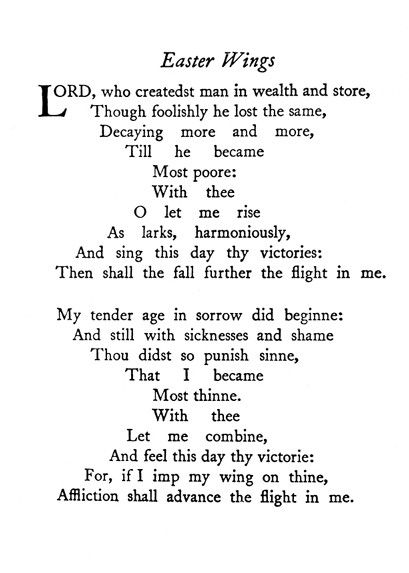 Our souls, in celebration of the Resurrection at Easter, are enabled to fly up to Heaven.

The Old Master: Walt Whitman’s “Song of Myself 26” (a selected series of lines)

Now I will do nothing but listen,

To accrue what I hear into this song, to let sounds contribute toward it.

I hear bravuras of birds, bustle of growing wheat, gossip of flames, clack of sticks cooking my meals,

I hear the sound I love, the sound of the human voice,

I hear all sounds running together, combined, fused or following,

Talkative young ones to those that like them, the loud laugh of work-people at their meals,

The angry base of disjointed friendship, the faint tones of the sick,

The judge with hands tight to the desk, his pallid lips pronoun-cing a death-sentence,

The heave’e’yo of stevedores unlading ships by the wharves, the refrain of the anchor-lifters,

The ring of alarm-bells, the cry of fire, the whirr of swift-streak-ing engines and hose-carts with premonitory tinkles and color’d lights,

The steam-whistle, the solid roll of the train of approaching car. . . .

Sometimes the Classic Form is called Simple Form. Hey, is anything ever simple?

The wayfarer,
Perceiving the pathway to truth,
Was struck with astonishment.
It was thickly grown with weeds.
“Ha,” he said,
“I see that none has passed here
In a long time.”
Later he saw that each weed
Was a singular knife.
“Well,” he mumbled at last,
“Doubtless there are other roads.”

When we examine these poems, we see interconnections of ideas through the shape, through the catalog, through repetition, and through other rhetorical techniques.

In addition to other techniques, Whitman’s catalog uses anaphora and plays with alliteration while Crane writes a narrative. Herrick’s poem may rhyme, but the controlling shape lands it firmly in the free verse world.

Join us on the 25th, for the new masters working in free verse.

Poetry is SOUND before it is SIGHT.

This rule is especially true of songs. Notice how Dolly Parton carefully uses elements of her voice to convey the meaning of the words in her famous “I Will Always Love You”. This is one of the earliest versions of the song.

In special cases, however, Poetry is SIGHT before it is SOUND.

SIGHT becomes an important element when the poet decides to play with the position of the words on the page.

Shifting the position of the words is one of the hallmarks of free verse. When a single word is placed on a line, with other lines presenting longer phrases or sentence elements, then that single word carries a gravitas far greater than its mere meaning and connotation.

The typography of the words *can* capture us visually before the ideas capture us. If the *shape* of the letter ensnares us, we will stay to read the ideas.

The soul is in flight to Heaven, and wings help us understand this. Then we start to realize Herbert’s hidden point: on Earth we are like caterpillars, inching along. We enter a cocoon state (death) prior to our soul’s in Heaven being transformed into something new and gloriously wonderful—just like with butterflies.

Lewis Carroll does not have such a deeper image in his Mouse Tail (Tale), yet he plays just as strongly with the typography.

With free verse, it is the SIGHT, the typography, that captures our attention.

The realm of poetry can be divided in two different ways:

1st, the purpose of the poem.

2nd, the method of the poetic structure.

These three methods are our focus in this season of blogs.

This is the poetry we are conditioned to accept. It is controlled by Rhyme and Rhythm. The poems of childhood and the songs of our everyday life fall into this method. Even rap music has an expected rhythm (beat, cadence, meter) as well as rhyme. This is Dolly Parton’s “I will always Love You” or George Harrison’s “What is Life”.

This is Rhythm WithOut Rhyme.

Blank Verse is usually intellectual. Think Shakespeare, especially the major dramatic speeches: Macbeth’s “Tomorrow and tomorrow and tomorrow” and Hamlet’s “What a piece of work man is” or “To Be or Not” soliloquy. Think Robert Frost at his best and most unexpected, in “Out, Out—” or “Once by the Pacific”. 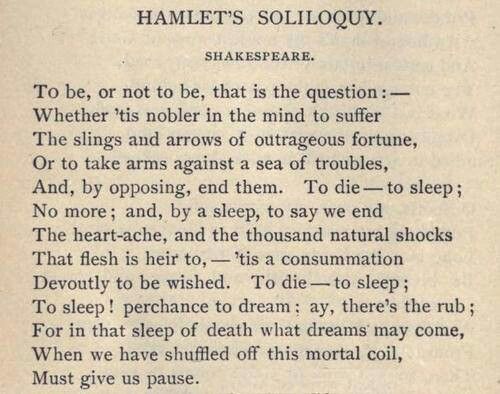 Poetry which is Neither Rhyme Nor Rhythm (but plenty of reason). The poet controls the line in other ways than the expected. 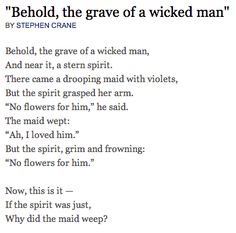 A Word on Line Structures

Songs become memorable when key elements are emphasized. Emphasis through unusual punctuation and capitalization are not acceptable means for our minds unless our minds truly love puzzles.

*Emily Dickinson and e.e.cummings break the punctuation and caps “rule”, but they are purposeful with their rule-breaking. It’s not communication anarchy.

Come back on the 15th for a closer look at the MMO of Free Verse.

Welcome to the Fall Writing Challenge from The Write Focus.

We focus on productivity, process, craft, and tools. October is Preptober for November’s National Novel Writing Month, known commonly as NaNoWriMo. December will include the steps needed to turn November’s rough draft into a publishable work.

That’s our focus here: inspirations to keep you writing and knowledge to solve your writing issues along with guidance through the publishing process. We’re for newbies who want to become writing pros and veterans who are returning to writing after years ago.

Thanks for listening to The Write Focus!

Write to us at winkbooks@aol.com.

Links become live on the day of the podcast broadcast.