For poetry lovers, we have a series of blogs, Poetry Lessons, guest-hosted by M.A. Lee of Writers Ink Books. Visit our page on every 5th  (5th, 15th, and 25th) to see which poem has inspired a lesson in thinking and writing.

Writers Ink is on a much-needed vacation. This blog post is the first and 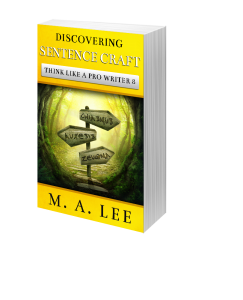 Poets will find Discovering Sentence Craft very helpful in improving their craft at the words and phrases and sentence levels. (The previous blog on the Three Unities is an example of the whole-concept craft.) Find DiscSentCraft here.

Yes, it’s possible. And practical. Especially practice-able when we want to create emphasis. (Yes, “practicable” is a word. It means “able to put into practice”, which is what we do in our writing with literary and rhetorical devices.)

“And the highwayman came riding–riding–riding / Up to the old inn-door.” (Noyes, “The Highwayman”)

Pick a key word, and it becomes the key element.

An increment is a small amount. Incremental Repetition is a small change at the next repeat of the word or phrase.

For a clever version of incremental repetition, check out Judy Collins’ version of Joni Mitchell’s “Both Sides Now”, (We also covered Mitchell’s song on April 15. You can head back there to read our analysis.)

Once we start considering how repetition increase emphasis, we encounter a clever Greek word auxesis, which means “growth” or “increase”, but is really a fancy way to say climactic ordering.

In Robinson Jeffers’ translation of Euripides’ Medea, our main character contemplates the murders of those who have wronged her: “Grind. Crush. Burn.” She, of course, chooses the last method, the one most painful and enduring. No quick deaths for Medea.

“Both Sides Now” uses auxesis to present ascending significance. The first stanzas discuss clouds (innocent, childlike naïveté), the next discuss love (the focus of our teens and twenties), and the last discuss life (maturity in considering our world).

Once is not remarkable. Twice seems coincidence. Thrice is serendipity.

Look above at how many times threes are used. In “The Highwayman” who is “riding — riding — riding.” In Mitchell’s three stanzas and three life progressions. In Medea’s contemplation of three methods of death, each more torturous than the one before.

And watch for all the repetition by threes that are coming up as examples.

We speed up by removing conjunctions: “Out, out, brief candle” is the asyndeton from the same speech by Macbeth.

Repetition can occur at the beginning of a series of sentences, which creates an anaphora:

Opposite to the anaphora is the epistrophe.

From Sam’l Beckett: “Where now? Who now? When now?” (The Unnamable)

This example comes from Jeffers’ Medea: “They were full of cold pride, they ruled all this country–they are down in the ashes, crying like dogs, cowering in the ashes, in their own ashes.”

Don’t overwork the repetition. With a light touch, its simple occurrence creates power on the page.

Use it to remind of elements of character. This is often called a character tag.

Use it to develop setting with a quick glance or a lingering view >> setting tag.

Crime scene images. Events in a mano-y-mano battle. Workings of a spell. Effects of a kiss.