In Think like a Pro: One Ancient Greek / Aristotle Rocks Story, we need a two-

part episode for an Old Geeky Greek’s ideas on plot and characters.

Aristotle knows how character can illuminate plot as well as the essential characters that every story needs.

Who is Aristotle? And …

What can a man over 2400 years old tell us about plot and characters?

More than most people think.

He’s tells us quite a lot about plot and characters … since every new and modern  writing terms is merely a re-thinking of the concepts that he worked on over 2,000 years ago.

Aristotle has the rocks for our foundational plot and characters. Both episodes run at 20 minutes each.

In the first episode, we look Aristotle’s essentials for dramatic structure, which creates a character-illuminated plot.

The next episode series from Think like a Pro will cover chapter 5 (3 episodes anticipated), One Simple: Injunction: Writer’s Block Doesn’t Exist.

We delve quite a lot into Shakespeare’s Romeo and Juliet and Euripedes’ Medea. People are often wary of launching into the usual Euripedes translation. For years, I taught Robinson Jeffers’ “translation” (it’s actually a re-thinking) to 9th graders at all levels. Easy to read and to follow. Concord Theatricals quotes the New York Daily News which said that it “won cheers and thirteen curtain calls”.  Also from NY Daily News ~
Judith Anderson (who performed Jeffers’ play in its first performance) was triumphant as Medea in New York, winning the Tony Award as Best Actress. Critics and audiences alike agreed that this adaptation of the Greek classic reaffirms Jeffers’ preeminent place among modern poets. 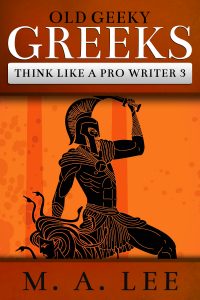 Listen to the first episode, posted on 2/3, and then follow up with the second  (on 2/10) on Podbean. Go straight to episode 2 with this link.