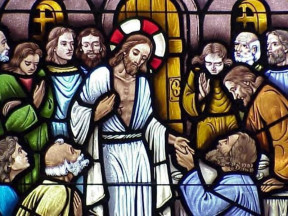 Why is Good Friday “Good”?

Good Friday is all about Saying No to Opportunities.

We say “No” to opportunities every day. Whether those opportunities are for our spiritual well-being or for our intellectual & physical improvements, we just say “No”.

How many times do we say “No” to Christ-given opportunities because they demand too much of a sacrifice?

Saying No to a Better Vision of the Future

We often say “No” because the opportunity is not what we envisioned it would be. It doesn’t match to our expectations.

The opportunity may not look like the shiny dream we imagined. It doesn’t give us what we presumed it would.

However, it may open multiple doors and windows in the future. It might even take the chains off our prospects, letting our dreams fly. But we shake our heads and move on. That opportunity is not what we expected it would be.

Christ was not what the Sanhedrin Court expected the Messiah would be.

The people of Jerusalem would have to continue to live under that pagan Rome government rather than rule over themselves.  Conveniently, the Court rabbis forgot how badly self-rule of Israel had gone before.

Under cover of darkness, the Sanhedrin Court uses lying witnesses to stack the evidence against Christ. Then, to ensure His death, they send Him to the head of the Roman government in Jerusalem by lying about Christ’s supposed treason against Rome.[1]

The Sanhedrin Court had to lie to shut the door on the opportunity Christ offered.

We do the same. We lie about an opportunity before us so it is easier to turn it down. That opportunity doesn’t offer our little checklist, so we reject it completely.

Only when that opportunity is gone do we realize how much MORE it is.

Saying No to Having a Spine to Stand Against Others

We say “No” because the opportunity before us goes against the crowd.

Pontius Pilate was the political and military leader of Rome in Jerusalem. On that Good Friday that he didn’t know would be good, he interrogated Christ based on the accusations of the Sanhedrin Court. Not once does he get the admission of treason that he needed to move forward.

But–he wanted to stay in “good” with the 50-plus rabbis . He couldn’t send Christ back to the Sanhedrin Court. Those Jewish leaders would be “upset”.

He passed the buck to Herod. Herod had a little fun with mockery then sent Christ back.

Pontius Pilate says, “You brought me this man as one who was inciting the people to rebellion. I have examined him in your presence and have found no basis for your charges against him.” (Luke 23:14)

Three times Pilate offers the crowd to punish Christ then release Him. Do they want Christ, bloody and beaten, or Barabbas, a criminal revolutionary? The crowd, for whatever reason, picks Barabbas, not Christ (whom they had celebrated six days before when He entered Jerusalem).

(I personally think members of the Sanhedrin were working through the crowd, offering more pieces of silver to bribe people to shout Barabbas, but I have factual basis for that thought.)

Mob Mentality is a dangerous thing.

How many times have we rejected an opportunity because so many people around us claimed it wasn’t for us?  Or claimed it was the wrong thing to do?

Or conversely, as we hesitate, caught between what we know is right and what is wrong, people clamor for us to choose the wrong thing.

Does the opportunity require moving or changing jobs?  Does it need stepping out of the norm?  Maybe it requires standing along rather than with the crowd?

Why shouldn’t we grab that opportunity?  Because they will be inconvenienced?

Saying No to having Shoulders that Will Bear the Weight

We say “No” because the opportunity requires too much sacrifice.

Christ is rejected. On Good Friday he is ~

And we reject an opportunity because it would inconvenience us. It’s a harder sacrifice than we’re prepared for. We would need to change our schedule or our plans. We might have to take a paycut now, even knowing we’ll make more later.

That opportunity might require us to leave our little circle and be among strangers. Or use skills we’re uncomfortable with. Or take a stand when we’d rather hide in silence.

Only One Reason to Reject an Opportunity

The only reason to reject an opportunity is if we know, going in, that it will damage our relationship with Christ.

And who are the people involved in our relationship with Christ? Just Him and us.

God has said, “Never will I leave you; never will I forsake you.” (Hebrews 13:5) If only we could be as steadfast.

And Good Friday is called “Good” because—after all we did to Him—he remains steadfast and loving, forgiving and saving, caring for us.

The Good is all on His part, all the good that He did and does and will do for us. Nothing from us. Everything for us. Everything intended for our good.

Consider the ways we reject the small and large opportunities that God gives us.

“For I know the plans I have for you,” declares the LORD, “plans to prosper you and not to harm you, plans to give you hope and a future. (Jeremiah 29:11)